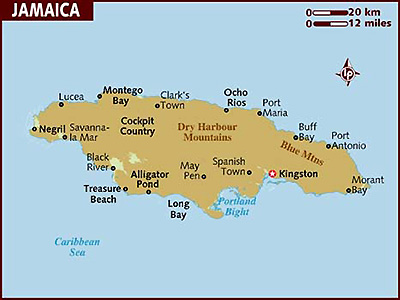 The two main charms of Jamaica are its bounty-island character and its distinctive culture. I am not talking about the distinctive aromas that one can smell seeping into the Arrivals-hall at the airport; although for many of my fellow travellers the biggest draw for visiting the island seemed to be the possible unlimited indulgence into smoking the plant with the seven-fingered leaves, of which I am not particularly a fan, by the way.

There are several ways to visit Jamaica and to try experience its nature and its unique culture. One way is, of course, by booking oneself on a cruise ship. There are very few cruises that voyage through the Caribbean that do not embark at one of Jamaica’s cruise terminals to subsequently vomit out a horde of holiday makers onto the quays, who have to do ‘Jamaica in four hours’. Another way is to book an all-inclusive holiday package in a luxurious resort, and to never venture outside of the gates. Both budgetary restrictions and personal taste forced me to strap on my backpack one more time and do Jamaica by doing it as the Jamaicans do: low-budget. That also gave me the opportunity to see the Jamaica beyond the waiting hustlers, the souvenir shops and the boutique hotels and restaurants. That’s the Jamaica where you squeeze yourself in a shared taxi with a Jamaican family, where you eat barbecued chicken at a hole-in-the-wall with your newfound reggae friends, where a long stretch of beach is all yours all day, and where you enter a lively discussion with a Rastafarian about his religion.


Forget the hipster hippies at home. These Rastafarians are the real deal when it comes to peace and love and the belief that all is one. Undoubtedly this peace has something to do with the copious amount of ganja they smoke all day. I mean, have you ever in your life met an aggressive pot-head? Rastafarianism is actually a true Abrahamic religion (I kid you not!) with the bible at its core. My knowledge on Rastafarianism was limited before I set foot on this island, so to my surprise while progressively discovering the island I also progressively discovered some intricacies beyond the apparent level of the ‘stoned-out dude with a rasta’. The real Rastafarians shun processed food and food with chemicals, eat no meat, drink no dairy or alcohol and do not use drugs, with their sacrament of ganja obviously disqualifying for such label. They do not see their weed as drugs but as an important tool to think more clearly, which I honestly have reasons to doubt. Thanks to the Rastafarians my stomach was saved several times from eating just again a dish of barbecued chicken with rice and beans, the typical island food. An important figure within the religion was/is the late Ethiopian Emperor Haile Selassie who is seen as the one who will lead the Rastafarians from their exile in God forsaken Babylon, which is their indication for Jamaica, to the promised land of Zion. I am sure that he was a potential for that back in 1930 when he was crowned in his homeland, but it is unclear to me how he will herd his sheep in the future as he died in 1975.


The world’s most famous Rastafarian is Bob Marley, Jamaica’s most popular son, who died of an extremely rare type of skin cancer back in 1981. Memories of Bob can be found all over the island. Besides the unescapable tunes and ubiquitous T-shirts there are Bob posters, Bob murals and Bob statues, and because Bob was definitely not infertile (he had eleven official children, although counts vary), every Jamaican appears to personally know someone that belongs to the Marley family. It is a family that seems to own a whole conglomerate of commercialism around Bob’s heritage, including Marley Coffee which uses the tagline ‘Stir it up’. Of course I knew Marley’s music but I had not realised the extent of what he had actually meant for a significant part of the population on this planet, specifically for those living under the poverty line. Being the first superstar from the developing world he addressed many of the issues that those lived below that line, or who still live there, practically deal with every day. The relaxing tunes doubtlessly do well during, say, dinner on a luxurious cruise ship, although what he sang about was for many black (and many white) individuals an encouragement to rise up against injustice, poverty and lack of education. The highlight of every Marley fan’s visit to the island is undoubtedly a pilgrimage to the man’s mausoleum. Photos, shoes and tobacco cannot be taken inside, but for those who want to light up a spliff an exception is made. They walk, sometimes coughing when it is there first one ever, anti-clockwise around the mausoleum to honour their hero.


Not all Jamaicans are Rastafarians, although many Jamaicans do have Rasta hair. Most Jamaicans are actually Christians and on weekends you can see throngs of well-dressed people walking to church to receive a sermon, with ceremonies larded with bounteous amounts of singing and dancing. Christianity comes in many ways. When I was in some backwater in the mountains I heard gospel singing coming out of a window and with my interest aroused I checked it out, only to discover that I had landed in the middle of a Christian Revivalist ceremony. They are one of the many Christian cults and sects that can be found in developing countries, and they are foremost known for their public exorcism rituals. And lo and behold, such a ritual was just going on when I stumbled into the ceremony hall. Now, I was not sure what kind of spirit had to be exorcised out of the woman that was under treatment, but it sure as hell was an interesting thing to watch. It cannot hurt to say that I do not necessarily dismiss such things immediately to the land of fairy tales, as my numerous experiences with the indigenous Shuar of Ecuador, and especially through meeting the wrong people of that tribe, have warped me into a reality of which such phenomena are surely part of. While the triplet of priests one by one took the word to summon Satan out, the woman regularly screamed, fainted and made brush movements with her arms and legs. On some occasions the priests slapped her in the face and held her by the throat. All accompanied by a little boy on a drum-kit in a corner, which for me added a bit of comic relief to the sometimes dense atmosphere. Finally, after having been given some unidentified liquid to drink, she vomited the culprit out of her and the congregation erupted in an enthusiastic ‘Praise Jesus!’ singing.


I rank Jamaica quite high on the All Stars list of general friendliness and relaxedness, much higher than if I would have based such decision on just the stories that I had read beforehand about how dangerous Jamaica is (yes, you should avoid walking alone at night in the most raunchy part of town) and how brash Jamaicans can be (yes, some have a pushy overconfidence about them). There were two notable exceptions to this generality: the hustlers and the drivers of the shared taxis. The first are the irritant dudes that kept pushing me to acquire their tour-guiding expertise, some souvenirs and/or (inevitably) some ganja. Their boldness has not reached yet the level at which their peers in India are, with Indian hustlers sometimes following their prey for an hour hoping that they get paid to be gotten rid of, but I deeply pray already for those who will visit Jamaica several years after me if things move towards the Indian way. The latter are the guys that pilot their cars between major towns, picking up more passengers than is physically possibly to fit in that car. The moment they start their engines, immediately something in their psyche changes and they mentally gearshift from resembling that black chauffeur played by Morgan Freeman in Driving Miss Daisy, into someone, or even something, that better has its place in the latest Mad Max movie.


Of course, Jamaica is very much about reggae, the islands’ national soundtrack, and anyone even remotely interested in music should not forget to visit both the excellent Bob Marley museum (where the guides even sing during the tour to connect Bob’s lyrics to the events in his life) and the Tuff Gong studio (probably the most influential music studio in this part of the world), both of them located in Kingston. Another typical Jamaican musical genre is dancehall, deep heavy beats accompanied with fast rapping. My personal preference goes to reggae and although experts assure me that there are a lot of different nuances to be discovered in different songs within the genre, I have to honestly confess that I have not found these intricacies yet, which is probably to blame on my underdeveloped sophistication in musical taste. The best environment to experience dancehall is to visit a Kingston’ street party and join the locals. If you want to get a picture of such a thing then imagine a four meter by four meter ‘sound-system’ speaker-set in a random outside location with a crowd gathered around it, which strikingly resembles the cast of Boyz ‘n the Hood. There is not much dancing going on, besides a bit of hopping from the right leg to the left leg, and besides the performance of a hired all-female dance team. This team is specialised in ‘twerking’, a dance-style that can best be characterised as having sex without actually having sex, with some acrobatics and requiring a specific competence in shaking the buttocks in an ultra-rapid manner. The dance-style was immortalised by Miley Cyrus, who goes down as a poor amateur compared to what I have seen in the nightly streets of Kingston. An interesting detail of such parties is (how could it be different?) the candy salesmen that stroll through the public, advertising their assortment that includes bonbons and cigarettes, but which also includes massive strands of ganja.


In Jamaica, English is spoken. It is an inheritance stemming from British rule. In the name of the Crown the island was occupied for more than three hundred years, first primarily to develop it into a pirates’ lair to disrupt Spanish endeavours in the Americas and later to grow profitable sugarcane using cheap slave labour. From English, Jamaicans developed their own language, patois. It is the language of choice of dancehall and reggae artists, although Bob Marley always sang in English. In Europe there are some all-white reggae bands of whom its members try to mimic the Jamaican voice and vibe, which usually raises the scorn of other whites. Interestingly enough, and I actually got this from an Australian producer of reggae music who spoke a bit of patois, Jamaicans love it when you even try to speak it a bit because the rich Jamaicans frown upon patois and all other Jamaicans consider it a national pride.

So let me honour the Jamaican contribution to world culture and a wonderful three weeks on this island by greeting you with a well meant ‘Tenk yuh, likkle more and walk good!’.