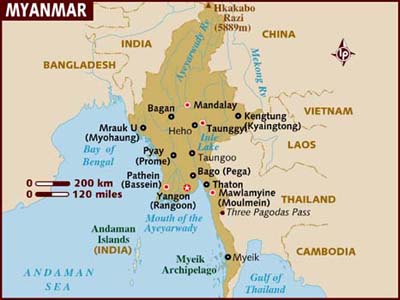 My penchant for visiting odd places was probably one of the prime reasons for me to go to Burma. Its oddness is incomparable to, say, North Korea, but it has a distant similarity in the form of a controlling military dictatorship that since 1962 has kept the country in a firm grip. It is only for the last few years that it has been possible to enter and travel relatively freely around Burma. That is, only relatively freely, as many places, especially in the north, are still off-limits to tourists, mainly due to insurgency. This closed off situation has kept the tourists out and made the country somewhat of a time-capsule with the chance to see things how they really are without too much of the blinding screens of a too much etched out tourist trail. There is also the chance to experience a relatively unspoiled attitude towards visitors, especially outside the tourist hotspots. The time-capsule is already slowly crumbling down because of the rapidly increasing tourist herds. So, with some irony in my voice, I say I wanted to see Burma before it is spoiled by 'the other tourists'!

Another reason for visiting Burma was that I wanted to do my next Vipassana meditation course there. Vipassana is a form of meditation that, according to those that propagate it, originated in India, found its way to Burma but was then lost in India, and was then reintroduced into India again from outside Burma. It's quite an intensive meditation, about ten hours every day, for ten days, with complete silence during those days. Highlights of each day are three hours of sitting and not being able to change position. Luckily this time the meditation room was much better ventilated than during my first course in India eight years ago, so in Burma there were no mosquitos flying around. The ultimate test to really understand your level of compassion for others is when you hear a mosquito circling your head and it is nearly impossible to avoid wishing that it would select the skin of your meditating neighbour instead of yours. The meditation technique is clean from most religious and sectarian ballast and focusses on sensing the sensations on and in the body, and with the hours of long sweeping of one's body, expansion comes. For me it is ten days of maintenance work on all levels, not the least the training of my back muscles of which I can feel all of them after sitting straight for ten days. I started my visit to Burma with the Vipassana course, and after that had some time to travel around the country and went to see some of the multitude of Buddhist treasures that can be found there.


When travelling in Burma, do as the Burmese do. That started for me with buying a longyi, a cloth that is wrapped around the waist and transforms into a skirt-like alternative to wearing pants. Most Burmese men wear them and I can't disapprove. They provide very welcome ventilation. You Scotsmen know who you are! Besides that, they seem to be well appreciated by the Burmese and as such helps in bargaining for things at a much lower entry price level, and in that regard I seem to be unable to separate myself from my Dutch nature. Another custom that I just had to try was chewing bethel-nut. Stalls all around town sell chopped up bethel-nut bits, mixed with tasty additives and sometimes even some Tobacco juice, wrapped in a leaf. This little package is put behind the cheek and chewed for around fifteen minutes, giving a mild relaxed feeling and a slightly more intense awareness of one's environment. Although it has a really low intensity it can be better compared to chewing coca leaves in the Andes than to drinking a glass of alcohol. What it also does is to colour one's saliva and mouth a deep red. It's not beneficial for the health as regular users (addicts?) all seem to have real dental problems and reportedly have an increased risk from throat cancer.


One Burmese custom that I could not succumb to was the appliance of thanaka, a substance that holds the middle between make-up and sun cream and is applied in considerable quantity on the face, where it stays for the whole day. It looks so peculiar that at first I had to constrain myself from offering a wet tissue to people to wipe it off. Applying thanaka is a custom professed by a considerable part of the population and it is so integrated into Burmese society that even those appearing in advertisements or in TV-series regularly wear it. It might have been Burma's isolation for the past few decades, but so far I have only heard about remote tribes still using such facial decoration, usually with the embracing of 'world culture' and 'world habits' such as wearing pants and only decorating one's face for a night out. Such local customs quickly disappear due to being regarded as archaic by new generations.

One issue that comes up when travelling in Burma is what to call the country. The name 'Burma' comes from old colonial times and refers to the Burmese people who make up about ninety percent of the population. In 1989 the military regime decided to change the country's name to Myanmar to cut ties with colonialism. Myanmar is a name, according to etymologists, which pretty much means the same thing. However, not everyone supports that name change. A highly respected opposition leader, Aung San Suu Kyi, is not in favour of it because it was the military and not the people themselves that chose the name change. Yet, when Obama visited Burma recently, he politely called it Myanmar. When one asks the Burmese (or is it the Myanmese?) what they like to be called, they answer that it really does not matter. Coming from a country that is either called The Netherlands or Holland, with the latter being technically incorrect, I can agree that in practice there indeed are no problems in having multiple names for one's country.


Burma is filled with Buddhist temples and stupas, although there is something peculiar about the stupas in Burma. Just as in several other countries, many of these stupas allegedly contain one or more hairs or other body parts of the Buddha. It is even said that the famous Golden Rock, Mount Kyaikto, which is a large boulder that balances on another one, can only maintain this balance because of a carefully placed Buddha hair in a pagoda on top of it. But when I count all these hairs, I can only reasonably conclude that in his time the Buddha must have had a similar amount of hair as Bob Marley, who was coincidentally also a master of peace and tranquility; though induced in a different way. It is the same for all the Buddha teeth that are kept in auspicious places. Apparently, Buddha had even more teeth than a Siamese crocodile. Or a bus full of senior monks; but such is not that difficult.

Thinking of monks as peaceful and introvert herders of tranquility and harmony? Think again. In 2007 monks played a pivotal role in what is called the 'Saffron Revolution' (a weird 'Western' term, as monks in Burma actually wear maroon coloured robes) in which thousands of monks protested for months against the military dictatorship. An antipode of those protests, focussed on negative change, is the 969 Movement of monk Ashin Wirathu and his followers. They are Buddhist extremists that are strongly anti-Muslim and run hate-campaigns against them. Even Time magazine ran a piece on them some time ago which prompted the government to ban that particular edition. I had never thought that even Buddhism, just as any other religion, could also have its extremists.


Burma is filled with Buddhist temples, not in the least on the immense plain of Bagan which is filled with them, and with shrines found on just about every hilltop in the countryside. At all these places droves of people are praying and paying their respect to the Buddha. Now, nothing against that, although I believe that really paying respect to the Buddha is done by adopting his qualities and not by rites and rituals. My aversion is to the worshipping that takes an extreme form. I am not talking about misguidedly emphasizing the dominance of man over Nature that seems to be implied by the omnipresent hilltop shrines. After all, the Swiss and Austrians also put a cross on every mountain top! It's more about the pointlessness that comes with some extreme forms of worshipping and the accompanying sexism that is deeply ingrained in some Buddhist cultures. Take, for instance, the Buddha statues at Lake Inle. Centuries of worshippers added thin layers of gold on the statues and made them into large undefined blobs of gold. Gold that could also have been used to elevate some of the countries' poor out of poverty by putting the gold to them instead of on a formless blob. Women are even forbidden to approach or touch the Buddha statues and have to watch the men apply the gold, which had me provocatively dance towards the blobs, rejoicing my manhood, dingily watched over by some female travelers. If there is anything that changes in the time-capsule of Burma, besides a regime change, it is hopefully this archaic religion infused way of thinking that is a change that many other parts of the world could also use. For now, I am just enjoying what is there.

Next time: Treasures of Thailand

Last time: In the Land of Insects