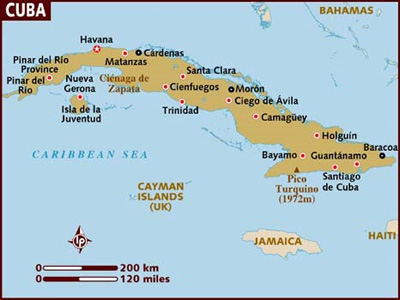 June 9th, 2014
The band plays Chan Chan while I am drawing on a huge cigar. Out of a misplaced shame I have removed the Cohiba label from it, although in Cuba cigars are definitely less expensive than in my favourite cigar store in Amsterdam. Two Cuban cigars still cost more than what the busy waiter earns in a month. Even doctors (male or female) earn less because they do not work in the tourism business. By now I have probably heard Chan Chan a thousand times. The fifteen year old rum that I am drinking makes it bearable to listen to it just one more time. I start to wonder if I should start to drink the cheaper stuff that the band members are drinking. They must have played the song a million times and they can still endure it with a smile. That is Cuba to the core, the ability to tolerate hardships with a smile.

The bar has a huge plaque on the wall saying that Ernest Hemmingway had frequently visited the place while he lived in Cuba. Even if I hadn't discovered the plaque I could have guessed. The prices of the drinks here are twice as high as in many other places.It seems that Ernest had actually visited most of the bars in La Havana, and regularly. One starts to wonder whether he was ever sober; or maybe he only went in to the bars briefly, maybe just for a piss, which resulted in the current owner being able to cash in big time? To me it is a mystery how he was ever able to squeeze out the books that he wrote, and for which he got a Nobel Prize for Literature in the form of a gold medal that he later donated to the Cuban people. Luckily I was not in an establishment that was actually mentioned in one of his books as that would have meant that the prices of drinks would have skyrocketed to even more astronomic proportions, for much the same cocktails that one can get anywhere. Years after his death, Ernest is Havana's biggest tourist trap, so I truly appreciated the bar that was advertising itself as a place that was actually never visited by Mr. Hemmingway: a rarity in Havana!


Another celebrity that is inescapable in Cuba is Ché. Ché is everywhere. Ché is painted on walls, Ché is captured in statues, Ché is printed on t-shirts and Ché is immortalised on bumper stickers. Ché is everyone's hero and is revered as an example for all. I knew about Ché from his Motorcycle Diaries. And I knew that after a career of being a rebellious revolutionary, he was eventually murdered by the Bolivian army, witnessed by CIA observers, after some deliberation between the governments in La Paz and Washington. But what I for some reason had not realised was the pivotal role that he had played in the Cuban Revolution itself, which sent Batista and his mafia henchmen out and catapulted Fidel and his bearded comrades to power. This included the last act of revolution in which an armoured train with 350 heavily armed soldiers was derailed and attacked by a handful of revolutionaries. Cuba's revolutionary history reads like a romantic novel where braveness and sheer luck finally result in a victory for the rebels, which literally speaking also shot Ché to a status of being the example hero for third world countries ready for revolution, and as an example hero to rebelliousness in general.


In the bar the tables around me are filled with couples. Most of them are older tourists with much younger Cuban dates. It is a sight that can be found in many countries where its visitors per capita significantly own a larger piece of the world's wealth pie than their hosts. Some of them were shamelessly licking off their dates and it was clear that they had come to Cuba to taste its culture in a very literal way. Besides these female sex tourists there were also male sex tourists, and in general I saw two kinds: those that could have been Ché's father and those that lacked the sex-appeal of Ché to such an extent that they would definitely have a hard time getting a date in their home country. That did not deter especially the latter category to act on the dance floor as if they were God's gift to mankind itself, with dance moves that worked probably great in the Sixties. I got more insight in this business when I was at the northern beaches. When at a beach bar I complimented the barman with the absolutely gorgeous female clientele, I was immediately offered a strip of Cuban made Viagra pills. I made it quite clear that I did not need them, and if I had needed them that I did not want them, and then our conversation really hit off. The man had been working behind the bar for fifteen years and had seen everything imaginable. He explained to me that these jineteras were looking for Westerners to attach themselves to; primarily as a ticket out of Cuba and if that did not work, at least they would be able to earn a few bucks.


Time has stood still in Cuba, literally. While looking at the watches of the Cubans that travelled with me in collectivos and busses while I crossed the island, to check time without having to pull out my phone, I became aware that half of the watches were not working. That time has stood still is reflected in the abundance of cars stemming from the Fifties that ply the streets in every city. One of the techniques to become aware of how another country, or another culture, works is not to look at what is actually there, but what is not there. There is a lot that you will miss in Cuba. There are hardly any supermarkets. Internet is only sparsely available. And there are no commercial streets advertisements to be found anywhere, which I personally found a blessing. What is copiously advertised is the Revolution and its blessings for the people, but almost sixty years after Fidel rose to power it somehow sounds like a needle that got stuck in a record's groove. Since those days the power structure in the world has completely changed and I wonder how many Cubans themselves actually believe the rhetoric anymore.

Despite the difficulties, I found the Cubans extremely social towards each other, with a lot of chatting in the street and taking time for each other. The hurry that so much characterises the atmosphere in 'progressive' countries is totally absent in Cuba. The socialness also shows while travelling. Hitchhikers are soon picked up by virtually any car that goes their way. After its social character, Castro's social utopia excels in health care. With an infant mortality rate lower than that of the U.S. and a life expectancy higher than it, Cuba ranks better on healthcare than most 'progressive' countries, despite its poverty. It is not without reason that the late Hugo Chavez chose Cuba to have his cancer treatments. Still, in spite of the benefits of the social utopia, droves of people try to escape the island to close-by U.S. Some 40 000 of them arrived there in 2013, with Miami taking in a large share.


There were two reasons for me to go to Cuba. The first is my penchant for odd places. Although this country does not score as highly on the "Ripley's Believe it or Not" ranking as the more obscure places such as Chernobyl or North Korea, Cuba does have an unusual edge to it. Like North Korea and the abandoned city of Pripyat in the Ukraine, entering Cuba is like stepping into a time capsule that harbours an atmosphere from a time long before I was born. In that regard Cuba literally is a museum, both in the material and the immaterial, and probably is interesting for anyone even remotely interested in contemporary history. That is, if you are not one of those tourists that reside in the zoo like all inclusive resorts on the northern beaches: the only reason why those people seem to get out of their comfort zone now and then is to hook up with a Cuban girl or boy. The second reason for visiting this country is that I strongly believe that Cuba as it is now will soon rapidly disappear. Most Cubans can tell you that under uncharismatic Raúl's five year reign more has changed than in the fifty years under charismatic Fidel and his endless speeches. And change continues, as it seems that Raúl understands that only by providing such change is he able to exercise some control over the direction of the country. Yet, to everything comes an end at one moment, even to the rule of the Castro's and the revolutionaries. Shortly after such an end there will probably be a McDonald's on every street corner in Havana, although I am pretty sure that none of them would ever claim having been frequented by Ernest Hemmingway.

Viva la Revolución!
(but not the Cuban one)

Next time: In the Land of Insects